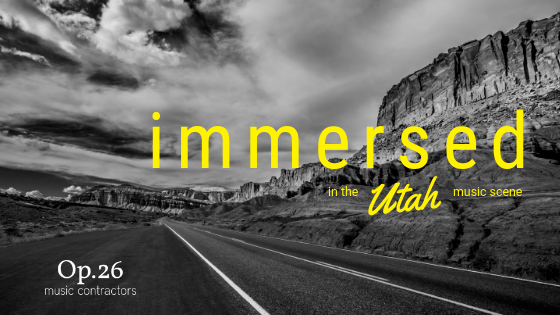 Opus 26 contracts musicians throughout the state of Utah. Call us to book recording sessions, private events, concerts, and plays. We have worked with incredibly talented musicians such as Kurt Bestor, Michael McLean, and Dave Zabriskie. We’ve worked with talented, international artists such as Michael Bublé, Trans-Siberian Orchestra, and Mannheim Steamroller. Whether it’s a small, private event with a quartet, or a full orchestra with singers such as a recent event with Hans Zimmer, we can hire the best local talent for your job. We’d love to help you out!

Meredith is a prominent professional musician in Utah, who has worked for decades going gigs, studio work, lessons, and as a previous member of the Utah and Delaware symphonies. She’s played all over the world, from the Utah State Fair, as a girl to London, where she studied during college, and even in China as a soloist. She’s played on hundreds of albums, and for thousands of concerts and Broadway plays. She also volunteers in the Orchestra at Temple Square as the concertmaster. She has worked as a contractor, hiring musicians to play alongside her for over twenty years. Meredith works with and hires the best.

“You have to be a top-dog sight-reader and be able to play in tune, with beautiful sound,” she says. “You just walk into a situation, sit down and play what is on that page.” Typically, jobs have no more than one rehearsal so professional musicians understand that they must retain all conductor remarks and corrections from that one rehearsal. It’s not for everyone. Not all musicians can handle the freelance life, even if they might make the cut. Just imagine what it’s like playing for the annual Trans-Siberian Orchestra’s show, sitting onstage with their touring rock band in the midst of laser beams and shooting flames. Seriously!

Lauren is an entrepreneur who keeps the gears turning behind the scenes for Opus 26. She does the bookkeeping and handles their website. She also has a business as a freelance writer, working on everything from social media content to blog posts to magazine articles and technical writing.